PennWest California junior Darrek Harshberger has been appointed to the Board of Governors of Pennsylvania’s State System of Higher Education. The board unanimously voted to approve the appointment in December.
January 17, 2023 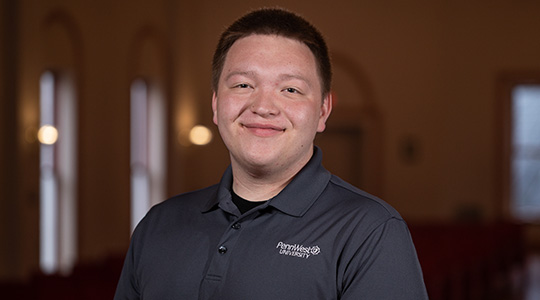 The Board of Governors is responsible for planning and coordinating development and operation of the State System. The board establishes broad educational, fiscal and personnel policies and oversees the efficient management of the State System. Among other tasks, the board appoints the chancellor and university presidents, approves new academic programs, sets tuition, and coordinates and approves the annual State System operating budget.

Harshberger is active in student leadership on the California campus. He is president of California’s Student Government Association, for which he previously was corresponding secretary and managed social media and outreach.

A communication studies major with a minor in event planning and management, he is president of California’s Rainbow Alliance, a board member on Student Associations Incorporated, Evenings chair for the Student Activities Board, member of and coach for the California campus Honors Program, secretary of the Student Honors Advisory Board, secretary of Commuter Council, a part of Alpha Lambda Delta, and a work-study student within Student Development.

“Mr. Harshberger is a highly motivated and highly involved student leader who is passionate about making a difference in the student experience on his campus,” wrote Dr. Dale-Elizabeth Pehrsson, PennWest founding president, in her letter of nomination. “Given the passion and dedication he has exhibited in his service to the PennWest California campus, I am confident that he would bring that same passion to the Board of Governors.”

The State System invites university presidents to nominate a student from their university. The board’s Governance and Leadership Committee then reviews the supporting materials and interviews the finalists before recommending a candidate to the full board for consideration.

The 20-member Board of Governors comprises: 11 members appointed to four-year terms by the Pennsylvania governor; four legislators; the governor or a designee; the state secretary of education or a designee; and three students, who serve until graduation.