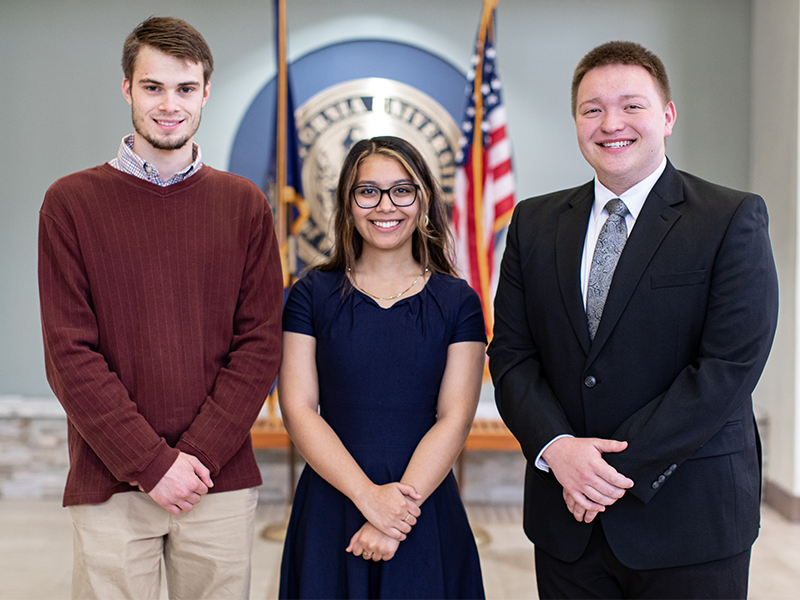 Darrek Harshberger, Samuel Shannon and Emily Muniz might have different majors and life goals, but they share a commitment to ensuring their peers have the best possible college experience.

The three were elected last spring as Student Government Association presidents at PennWest’s California (Harshberger), Clarion (Shannon) and Edinboro (Muniz) campuses. Each student leader has previous SGA experience, but integration of the three campuses has presented opportunities for them to work together.

“Sam, Emily and I have been talking about the future, the fall semester, and what we want to do for and with our student bodies,” said Harshberger, a junior communication studies major with a minor in event planning and management.

“We have a Snapchat group chat where we communicate as friends, and also about business,” said Shannon, a senior with a dual major in mathematics and secondary education (mathematics). “We have the relationship as friends, but also peers.”

“We bounce ideas off of each other and give advice to each other,” said Emily Muniz, a senior political science major.

Melissa Dunn, director of Student Engagement for PennWest and advisor to California’s SGA, said student government gives all students the opportunity to shape the student experience at PennWest.

“These three students, who serve as leaders of our Student Government Associations on each campus, have brought together the individual campus perspectives and are leading us into the future,” she said. “Along with my fellow advisors, Matt Shaffer (Clarion) and Dave Goodwill (Edinboro), we are proud of the work already completed and look forward to an exciting year in SGA.”

The SGA presidents gathered in person when Edinboro and Clarion visited the California campus last year. They also met this fall for the PennWest DEI Summit at the Edinboro campus.

Working together benefits the entire student body of PennWest.

“Having the three Student Government Association presidents work together allows us to bounce ideas off of each other,” Harshberger said. “Together, we can help not just each other, but each campus.”

The trio of presidents, all of whom are first-generation college students, have various reasons for becoming campus leaders.

“My goals are to make the students feel heard and to improve internal processes,” Muniz said. “I believe I have a unique perspective, good communication skills and a lot of ideas for improvement.”

She previously served as secretary and director of public relations for SGA, and she has been involved in Edinboro’s Latino Student Organization, was the secretary for Model UN and Model NATO, and helped other students as a writing tutor.

“Being involved at Clarion has given me fantastic opportunities, and my experiences here are unmatched to anything else,” Shannon said. “I want to be a leader among students to provide them with the same life-changing experiences that I have gotten from my time here.”

Shannon’s prior experience with Student Senate (Clarion’s SGA) was as a general senator and as treasurer. He is president of Sigma Phi Epsilon fraternity and has been involved on several task forces, as well as in Math Club and intramurals, as a tour guide for Admissions, and as a participant in the President’s Leadership Academy.

Harshberger has two years of experience in SGA. Last year, he was corresponding secretary and managed social media and outreach for the organization. He is president of Rainbow Alliance, a board member on Student Associations Incorporated, “Evenings” chair for the Student Activities Board, member of and coach for the university’s Honors Program, secretary of the Student Honors Advisory Board, secretary of Commuter Council, part of Alpha Lambda Delta, and a work-study student within Student Development.

“Being a leader allows me to give students the voice that they might not feel comfortable sharing,” Harshberger said. “I want to ensure that the student bodies across all of PennWest are heard and appreciated. I want our students to really feel like they matter – because they do – and to know that they can be a part of something, whether it’s big or small.”

For Shannon, whose home town is Vandergrift, leadership and involvement have helped him fine tune his career plans.

“I originally wanted to be a math teacher, but my time at Clarion has made me consider otherwise,” he said.

Adding a mathematics major broadened his interest in the subject, and involvement in student life has also been a significant part of planning his career.

“Through Greek life, Student Senate and other organizations, I have developed an interest in student affairs,” Shannon said. “My ultimate goal is to end up in higher education, but I am not sure whether that will befrom the student affairs or academic side.”

Harshberger, a Duncansville native, also has his sight set on a career in higher education.

“I was enrolled in the secondary education (math) program; however, halfway through my sophomore year, I found a strong passion in wanting to work in higher education,” he said. “Communication studies gives me a wide range of skills. Event planning and management has always been a goal; I love planning events on my campus already.”

Hershberger said he wants to help students in the same way that California’s Student Affairs team does. “I hope to continue my career atPennWest California after graduating,” he said.

Muniz, of Oxford, was inspired by recent events to study political science, which she believes will benefit her desire to go to law school. She spent her summer studying for the law school entrance exam.

“I want to open my own law firm one day,” she said.

Student government is the governing body of clubs and organizations and serves as a liaison between students and administration.