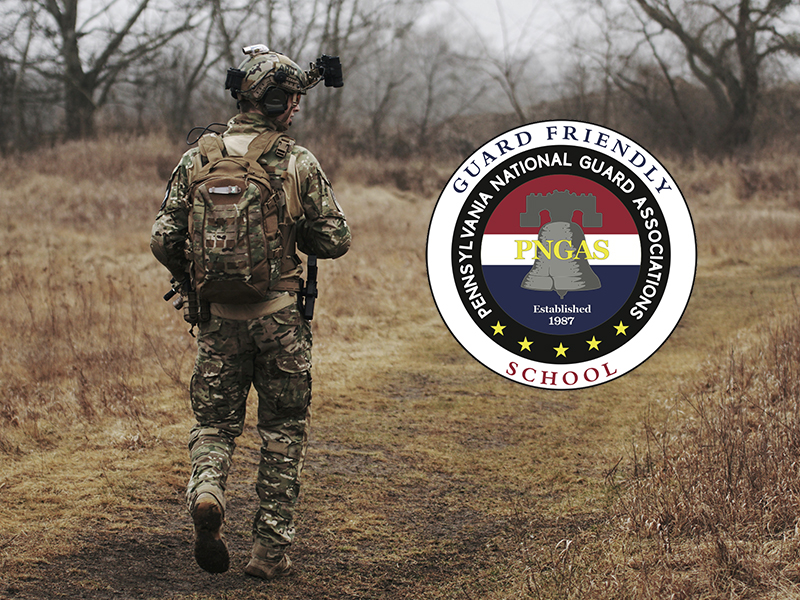 The Pennsylvania National Guard Associations – an education rating that promotes best practices and educational value in K12 through higher education – announced that California, Clarion and Edinboro all received the outstanding military-friendly distinction.

Launched under the leadership of Brigadier General George Schwartz (Ret), PNGAS Guard-Friendly Schools serves as a beacon and star-rating that promotes the institution to Guard members, veterans, spouses and families, as well as to state leaders, high school and college counselors, prospective recruits of the guard, and the general public.

“Guardsmen have unique responsibilities that active-duty troops and reservists do not have, and this creates different challenges for them when pursuing a degree,” said Joseph Dagney, chairman of the PNGAS Education Action Council. “These schools have made a deliberate effort to be flexible, accommodating and supportive of guardsmen and their families, and they are most definitely deserving of recognition.”

Pennsylvania has distributed almost $300 million through the Education Assistance Program, the leading recruiting tool for the Pennsylvania National Guard. The EAP provides a tuition benefit equivalent to the yearly tuition rate set by Pennsylvania’s State System of Higher Education.

The PNGAS Guard Friendly School designation is designed to optimize taxpayer dollars, increase the positive impacts of the EAP program, and promote and champion schools that meet and exceed the Guard-Friendly standards adopted by PNGAS.

PNGAS is an independent non-profit organization, not associated with or legally connected to the Pennsylvania National Guard, U.S. Military, Pennsylvania Department of Military and Veterans Affairs or the state or federal government.

This designation follows Pennsylvania Western University’s mission to serve current military and veteran students. PennWest takes tremendous pride in knowing that our three campuses – California, Clarion and Edinboro – were deemed Military Friendly more than a decade. Veterans served our country. Now PennWest serves its veterans. Each campus has a military and veteran affairs personnel to help transition veterans to academic life with ease.

Learn more about our services for U.S. veterans at https://www.pennwest.edu/military.