Adolescence can be a difficult time for anyone, but as someone who stuttered, it was particularly challenging for Kyle Purnell ’12, ’13G.
January 18, 2023 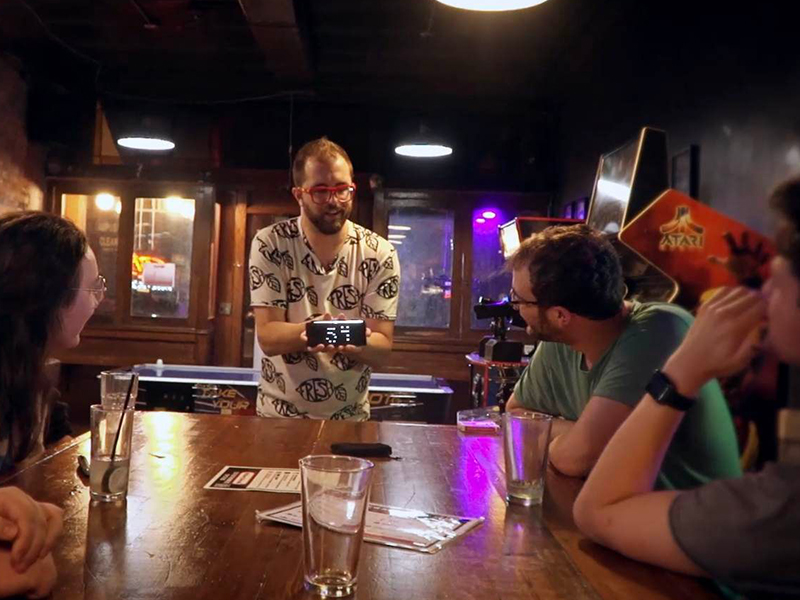 When he was in middle school in 2004, he was searching for acceptance among his peers. He wasn’t able to do what most of them could do – speak without stuttering – so he set out to find something he could do that they could not.

“It was the golden age of the internet, and people started to realize there’s information there,” Purnell said. “I just searched ‘free online magic tricks,’ and I learned my first real magic trick – how to make a playing card disappear. I thought it was the coolest thing.”

“I woke up the next morning – the sun was shining, the birds were singing, and I knew this incredible magic trick,” he said. “I went to school and showed everyone, and it was awful. Of course, it was awful – I had just learned it the night before.”

The awed reaction he expected didn’t occur. “Clearly, because I was new at it.”

Nevertheless, he was motivated to continue.

“There’s something inherently enchanting about magic to me. I think it’s more enchanting to have magic be fake than for it to be real,” he said. “If we lived in a world where magic exists and people had magical powers, it wouldn’t be as enthralling.”

“The fact that I can emulate something impossible, even though everybody knows it’s not real – that juxtaposition of knowledge and feelings is just so fascinating,” Purnell said.

Once he delved more deeply into magic, he realized that magic tricks didn’t just exist – people created them. As he matured, he learned that if someone invented a magic trick, aspiring magicians should support and learn from that person.

Through a combination of reading books and learning from those who created tricks, he steadily refined his magic.

“Magic became what I loved most that wasn’t human,” he said.

When Purnell began college at Clarion, he felt a noticeable shift in how people perceived him.

“People at college only knew me as the magician. People at high school had known me before and saw me as a novice,” he said. “At college, people saw him with the identity of a magician.”

Purnell made his debut during band camp.

“As a freshman in college, magic was a social crutch, more than anything; it was my way to pretend that I was a normal person,” he said. “As soon as someone met me, I dropped the information that I could do magic. It was so cringy, but that’s what I did.”

Something else changed when Purnell performed magic: He didn’t stutter.

“There’s a phenomenon in the stuttering world – some fluency-enhancing phenomena. People who stutter don’t stutter when they sing, when they whisper, when they act,” Purnell said. “The reason is that they aren’t them; they’re channeling someone who doesn’t stutter. While I’m still me, I’m magic me. There’s a subconscious difference. Magic me doesn’t stutter.”

A significant reason that people don’t stutter when they perform is the confidence they gain.

“While stuttering isn’t caused by a lack of confidence, if you’re someone who stutters and you gain confidence, that will positively affect your stuttering,” he said. “When you’re confident, you’ll have more control of breath support, more control of articulators and the muscles in your mouth.”

Purnell was in speech therapy for 10 years, from kindergarten to high school. He said it was incredibly helpful, but it only took him so far.

“The eligibility criteria to have speech therapy for stuttering is that it needs to negatively impact the person,” he said.

As he gained confidence in magic, the stuttering no longer had a negative impact. Performing was shaping the way he talked.

Purnell graduated from Clarion in 2012 with a bachelor’s degree and in 2013 with a master’s degree, both in speech therapy. He works with children, helping them to overcome speech difficulties. He uses magic as reinforcement.

“At the end of the session, if they do a good job, I’ll show them a trick,” he said. To his knowledge, no one has caught the magic bug as he did, but there’s been some mild interest. Sometimes he teaches them a simple trick that they can show their friends.

As for his magic, he is enjoying great success. He is a professional magician and performs weekly at The Grand Illusion, a magic-themed hard cider bar in Carlisle. He also performs at corporate parties and events – everything but kids’ shows.

“My show has a target demographic, and it’s not kids. I love kids, but that’s not what I do,” Purnell said.

He said his shows are comparable to Marvel movies in that they aren’t inappropriate for kids to watch – they’re just not designed for them.

“I don’t do visual magic,” he said. “I like to do cerebral magic with a thinking audience – things kids might not understand and appreciate.”

Purnell said that he falls in love with magic and performing more every day. His crowning achievement thus far will be an appearance on “Penn & Teller: Fool Us.”

“I’ve been trying for years to get on the show. On a micro level, I’m doing things very different from other magicians’ work, but on a macro level, if you zoom out, I’m just a guy doing card tricks. I didn’t stand out. I didn’t have a name to myself and had no clout in the magic community,” Purnell said. “Now, I do have clout in the magic world. People know who I am; I’m known for creating my own effects. That helped garner the producers’ attention.”

He submitted something original, and the producers contacted him.

“It wasn’t just a ‘yes,’” he said of their phone call. “I had a Zoom interview during which I performed live for the producers and a magic consultant they have. On the second Zoom interview, they finally said, ‘Congratulations.’”

Purnell filmed his segment on the show last spring. Viewers can find out at 8 p.m. Jan.27 on The (Pittsburgh) CW if Purnell fools Penn & Teller.

“I don’t know how many times dreams come true for others, but for me, it was a dream come true,” he said.