Senior Divonne Franklin (Philadelphia, Pa./Archbishop John Carroll) reset the all-time championship record in the 100-meter dash and was named the Outstanding Track Athlete of the league.
May 14, 2022 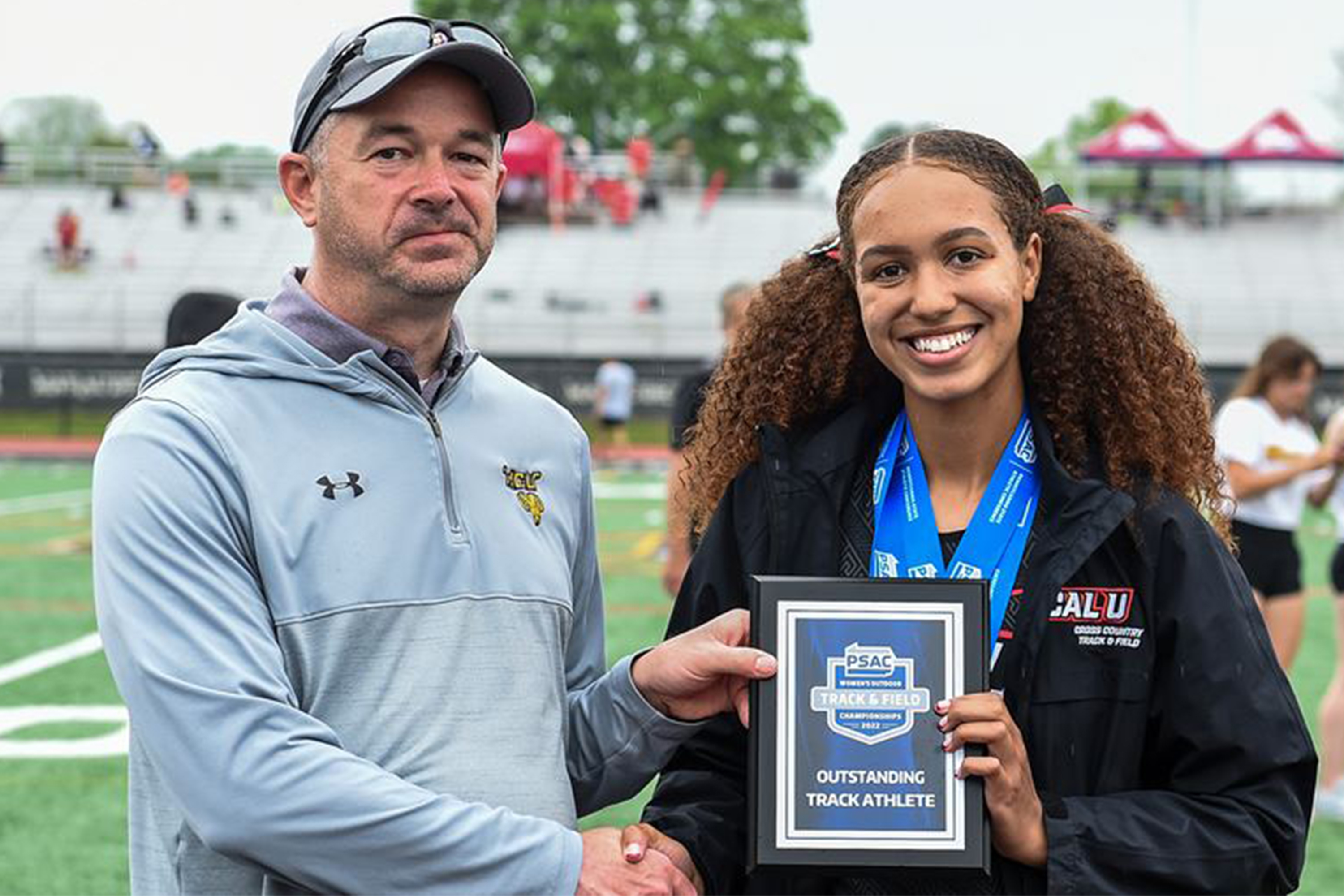 MILLERSVILLE, Pa. (May 14) – Senior Divonne Franklin (Philadelphia, Pa./Archbishop John Carroll) reset the all-time championship record in the 100-meter dash and was named the Outstanding Track Athlete of the league meet on Saturday, as the Vulcans captured five titles and placed fourth in the team standings at the Pennsylvania State Athletic Conference (PSAC) Championships.

Franklin won a combined three league crowns on the final day of the championship event hosted by Millersville. She is now an 11-time PSAC Champion after claiming a combined eight conference titles since last May. Franklin broke a pair of 38-year old championship records this weekend while receiving Outstanding Track Athlete for the second time this year, as she also garnered the accolade at the indoor championships.

The California University of Pennsylvania women's track & field team finished fourth at the outdoor meet with 85 points after scoring in 10 events. The host Marauders captured their first league title since 1996 after totaling 113 points over the weekend. Slippery Rock placed second in the team standings with 93.33 points and Shippensburg ranked third with 87 points.

Franklin repeated as the outdoor conference champion in both the 100-meter dash and 200-meter dash on Saturday. She eclipsed her own meet record in the 100 meters set yesterday by two-hundredths of a second with a time of 11.66 seconds. Franklin cruised to the league title after posting the top in the finals by over five-tenths of a second. The Philadelphia native claimed the conference crown in the 200 meters by more than six-tenths of a second with a time of 23.99 seconds. Franklin broke the championship record in both events during the preliminaries on Friday after each stood since 1984.Junior Kailee Bunyard (Columbia, Md./Atholton) completed the season sweep in the sprint hurdles, as she won the league title in both the 60-meter hurdles (indoor) and 100-meter hurdles (outdoor). On Saturday, she set a personal record of 14.52 seconds to win the finals of the 100 hurdles by three-hundredths of a second. Last spring, Bunyard placed third in the event to earn All-PSAC laurels for the first time in her career.

Fellow junior Malia Anderson (Greensburg, Pa./Greensburg Salem) became the program's fourth different league champion in the 800-meter run since 2010. She crossed the finish line with a time of 2 minutes, 13.28 seconds to win the event by over 2.7 seconds. During the indoor season, Anderson placed third overall in the event after receiving All-PSAC Second-Team laurels in cross country.

The Vulcans also captured the conference title in the 4x400-meter relay on Saturday. The relay of Franklin, Anderson, freshman Taylor Timmons (Butler, Pa./Butler) and junior Beyoncé Kelly (Edgewood, Md./Harford Technical) set a season-best time of 3:52.61 to win the event by over two-tenths of a second. Cal U has earned a relay crown in each of the last three years (2020-4x400 indoor; 2021-4x100 outdoor).As an individual, Kelly received All-PSAC status in the high jump for the third time in her career. She placed second in the event after clearing 1.70 meters (5-7.0 feet) on her second attempt.

Cal U scored with three entries in the high jump at Millersville. In addition to Kelly, junior Anna Ebersole (Pottstown, Pa./Bishop Shanahan) earned All-PSAC honors after finishing third in the event. She set a personal record with a mark of 1.67 meters (5-5.75 feet) on her third attempt at the height. Ebersole broke her own school record in the heptathlon yesterday while receiving All-PSAC laurels in the event. Freshman Tatum Hoffman (Ligonier, Pa./Ligonier Valley) placed sixth in the high jump on Saturday with a height of 1.54 meters (5-0.5 feet).In the 4x100-meter relay, the Vulcans placed fourth overall with Franklin, junior Darcie Frazier (Hollidaysburg, Pa./Hollidaysburg), Timmons and freshman Vanessa Damone (Harrisburg, Pa./Bishop McDevitt) recording a season-best time of 47.80 seconds

.Sophomore Quintasia Streeter (Brentwood, Pa./Brentwood) scored in the triple jump with a distance of 10.83 meters (35-6.5 feet) to finish eighth in the field.