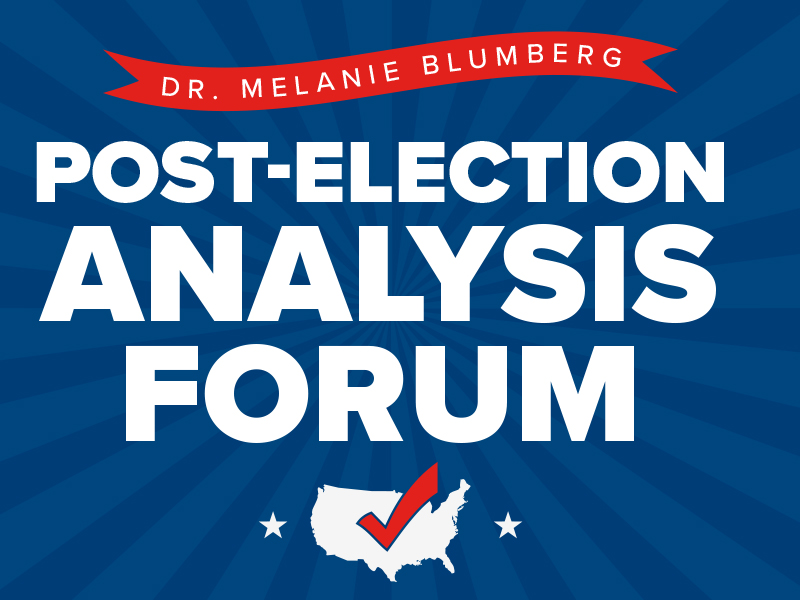 Political analyst Jon Delano, the money and politics editor at KDKA-TV in Pittsburgh, will moderate the event, which will be held in Duda Hall 103 on the California campus or via livestream.

A panel of distinguished experts will analyze the outcomes of key 2022 midterm elections in several states, including for U.S. Senate and governor of Pennsylvania, and take a look ahead at the 2024 presidential election season:

•  Alan Abramowitz, the Alben W. Barkley Professor of Political Science at Emory University in Atlanta, Ga. Author of “The Great Alignment: Race, Party Transformation and the Rise of Donald Trump.” He is recognized as one of the nation’s leading forecasters of presidential and congressional elections.

•  Amber M. Gaffney, a social psychologist whose research focuses on group processes, intergroup relations and how people's identities mobilize social change. An assistant professor at Humboldt State University in Arcata, Calif., her work has been featured on National Public Radio and the BBC.

•  Louis Jacobson, a political columnist and senior correspondent at PolitiFact. Senior author of the 2016, 2018 and 2020 editions of “The Almanac of American Politics,” he has been a visiting scholar at both West Virginia and St. Bonaventure universities, where he teaches students how to contribute to regional PolitiFact projects.

•  Tony Norman, a columnist for NEXTpittsburgh, chair of the International Free Expression Project, a partner in the National A.W. Mellon Democratic Futures Project, former president of the National Society of Newspaper Columnists (NSNC) (2020-2022), and a member of the Pittsburgh Black Media Federation.

The forum has been named for the late Dr. Melanie Blumberg, a political science professor and founder of California’s American Democracy Project chapter.

About the American Democracy Project

The American Democracy Project is a multi-campus initiative focused on higher education's role in preparing the next generation of informed, engaged citizens for our democracy. Its goal is to produce graduates who are committed to being active, involved citizens in their communities. In 2003, California University of Pennsylvania was one of the first universities to pilot the American Democracy Project.