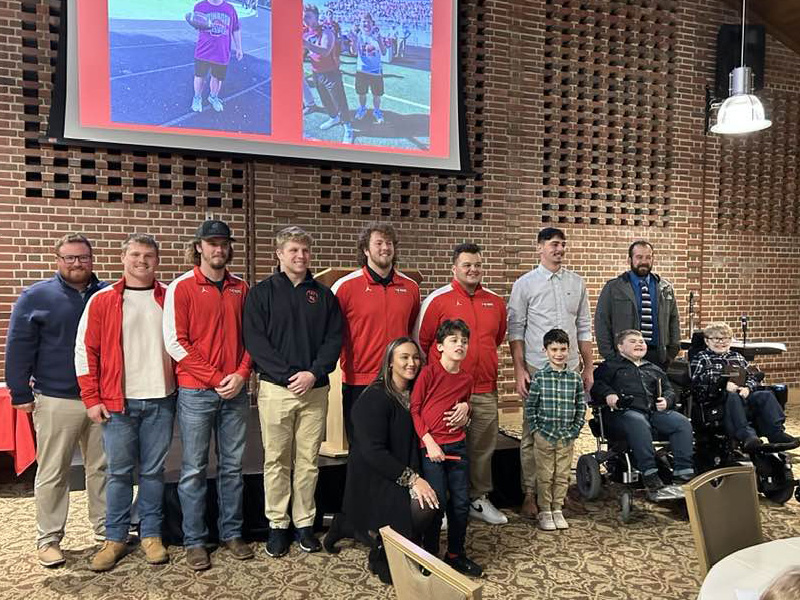 Launched in fall 2016 by then Edinboro sophomore Ryan Stratton ’19, the initiative brings students with disabilities and children battling cancer to the sidelines of home Edinboro football games and into the locker room with the team.

“The program is a great example of Edinboro’s legacy as an inclusive campus for individuals with accessibility challenges,” said Amanda Brown Sissem, associate vice president of Alumni Engagement and Edinboro campus administrator. “The tradition continues through the support of Edinboro Athletics, Ryan’s ongoing volunteerism, the enthusiasm and cooperation of our Fighting Scots football players and community partnerships, including Make a Wish.”

An honorary team member is selected prior to each home football game. They are included in team meetings and given a jersey to wear as they cheer on the Fighting Scots from the sidelines. Following the season, participants and their families are invited to a special 12th Man banquet.

“They even get to go into the locker room with the team before and after the game,” Sissem said. “The program and banquet are wonderful, and the participants and their families are our biggest fans. They love their Fighting Scots.”

“The year after Ryan started the initiative, we nominated him for the Allstate AFCA Good Works Team, and he was selected as a finalist,” said Edinboro athletic director Dr. Katherine Robbins. “He is an exceptional young man, and I’m proud to see him ensure that the program continues.”