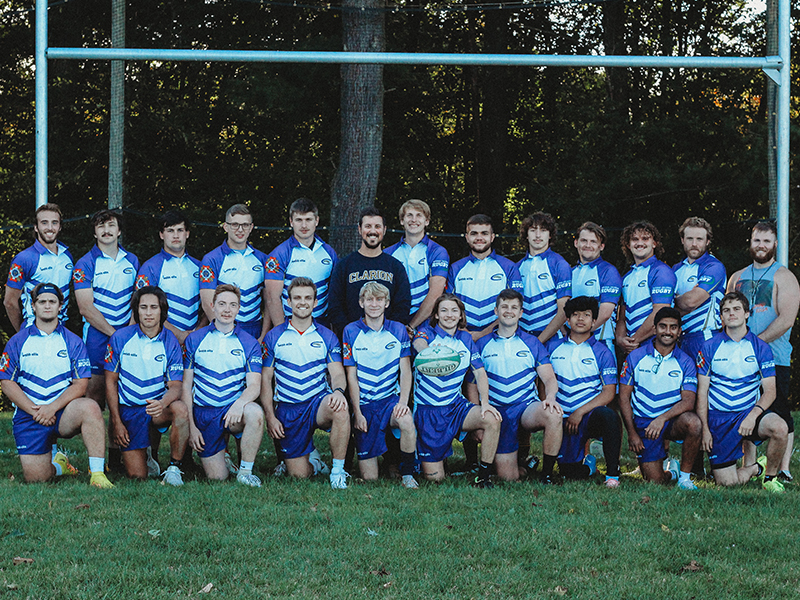 Students struggle with breaking football habits when they start rugby, he said. They think, ‘I made a tackle, the play is over.’ Earlier this year, they kept asking what plays they’d run.

“The kids make those decisions on the field. We practice all week; either you’re prepared to do those things, or you’re not. Kind of like taking an exam,” he said.

Their preparation has been apparent this fall.

“Our men's rugby team won our conference bowl championships this year,” said Sanko, who also advises the women’s team alongside coach Dalton Meals. “We beat St. Vincent College in the first round of the playoffs, and we will be going to St. Louis to compete for a Regional Bowl Championship this weekend.”

Sanko’s background in rugby began in his senior year of high school, when a group of friends asked him to play.

“I played five years in college, played men's senior side rugby in Detroit and for a year in West Virginia,” he said. Upon arriving at Clarion in 2018, he contacted the teams to get involved.

At Clarion, rugby is a club sport, which Sanko describes as a step below varsity sports and a step above intramural sports. As a Recognized University Organization, rugby’s budget and on- and off-field events, as well as decisions about coaching and leadership, are made by students.

Sanko said players gain both on-field and organizational leadership experience. His role is to provide a practice plan for the team and to manage the matches, and he talks regularly with team leaders to offer guidance.

“We meet weekly to talk about issues, frustrations, helping them understand what their responsibilities are: You’re the president or captain – the buck stops with you.”

He mentors the team on how to play the game and to play it safely. Playing a contact sport without helmets or pads, players need to be prepared to tackle properly to keep injuries minimal. Despite the lack of pads, rugby tackling is designed to lessen the number of head and body injuries.

“I keep eyes on them academically. I can’t make rules because it’s a club sport, but I give strong suggestions not to party too hard, that they’re here for academics first,” Sanko said.

Rugby players have diverse backgrounds. Some are students who played sports in high school but aren’t playing a varsity sport in college. Some are former varsity athletes who, for varied reasons, left the varsity sport but want to compete. Some are just looking for something to do. A common thread is that all seek to be part of something.

“It brings a new sense of camaraderie that I’ve never felt or had,” said Ethan Zdarko, rugby president and co-captain. “While playing, I learned that no one person can make things go right; it is only when a group of people come together and work as one that great things happen.”

Zdarko, a senior biology major, has played rugby since his freshman year.

Sanko said parents are thankful, too.

“I get many parents after games thanking me for taking time to coach and mentor their sons,” he said. “Their Clarion experience is so great because they found a sport.”

Sanko invites the campus community to support rugby by coming out to home games. He advocates for supporting student organizations in general.

“Any club, athletic or not, is important. It gives that sense of community.”