California inducted the four standouts at a ceremony Sept. 24 in the Natali Student Center
September 27, 2022 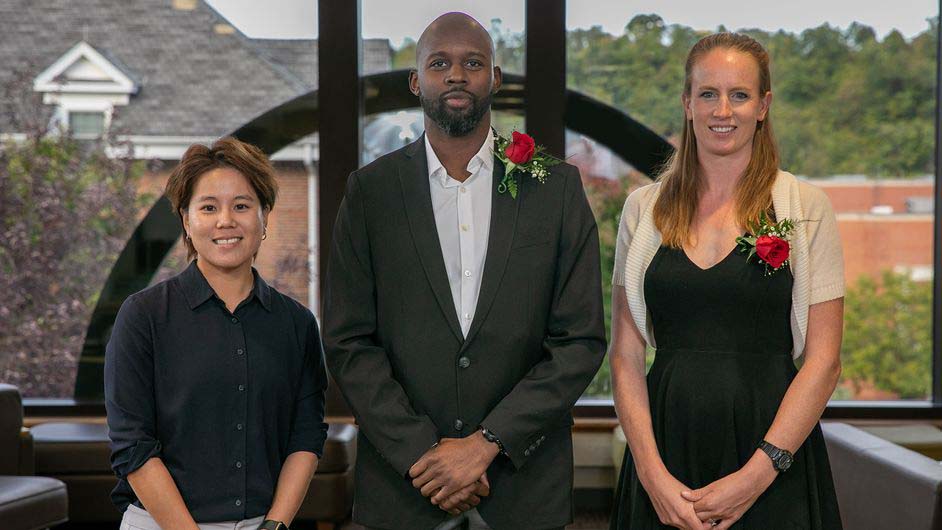 California inducted four members into the Athletic Hall of Fame, plus recognized the Silver Anniversary of the 1997 NCAA National Championship softball team, at a banquet on Saturday evening in the Performance Center of the Elmo Natali Center.

Gates Rohrer (Leola, Pa./Conestoga Valley) was a three-time NCAA National Champion and a 10-time NCAA All-American for the Cal swimming team from 2008-12. She helped the Vulcans place as high as third at the PSAC Championships three times in her career, which is the best finish in program history. Rohrer won a combined five league titles as a senior at the 2012 PSAC Championships and was selected the PSAC Swimmer of the Year. As a junior, Rohrer became the program's first-ever NCAA National Champion by winning the 50freestyle before repeating in the event at the 2012 NCAA Championships. She also captured the national title in the 100 freestyle as a senior to become only the second three-time individual NCAA Champion across all sports at Cal. Rohrer still holds a combined six school records. She is the first swimmer in school history to be selected for the Athletic Hall of Fame.

Montana (Miami, Fla.) served as head coach of the women's tennis team from 2002-16. He led the program to 10-consecutive PSAC Championships from 2007-16 and 13 appearances in the NCAA Tournament, advancing to the national quarterfinals seven times. Montana guided the Vulcans to a276-83 record in dual matches for a .769 winning percentage behind six-straight, 20-win seasons. Montana was chosen the ITA National Coach of the Year in both 2007 and 2010, plus was named the PSAC West Coach of the Year eight times in a span of 12 seasons. He mentored a combined 16 ITA All-Americans, including six singles players, and eight PSAC West Athlete ofthe Year recipients, highlighted by a pair of Athletic of Fame inductees. He is the first women's tennis head coach to be chosen for the Athletic Hall of Fame.

Myers (Pittsburgh, Pa./McDowell) was a six-time NCAA All-American and a five-time PSAC Champion in the hurdles for the Cal men's track & field team from 2008-12. He captured the league title in the110-meter hurdles in three-consecutive years from 2010-12, becoming only the second athlete in program history to accomplish a 'three-peat,' and won back-to-back conference crowns in the 60-meter hurdles in 2010 and 2011. Myers broke the PSAC Championships record in the 110 hurdles as a senior and was chosen the PSAC Track Athlete of the Year twice in his career. Myers finished among the top-four in the hurdles at the NCAA Championships four times in his career. He placed second in the finals of the 110-meter hurdles as a junior before setting the school and all-time PSAC record in the event at the 2012NCAA Championships. He is the first hurdler from the track & field programs to be selected for the Athletic Hall of Fame.

In addition to the inductees, Cal recognized the Silver Anniversary of the 1997 softball team which captured the first national title by any team in school history. Led by head coach Rick Bertagnolli, the Vulcans set the school record for wins by finishing the season with a 53-5 overall record. Cal mounted a staggering 34-game winning streak during the season when it out-scored opponents by a 244-27 margin behind 18 shutouts. The Vulcans opened play at the NCAA National Championships a win over Florida Southern before claiming consecutive 1-0 victories against both Wisconsin-Parkside and UC Davis. California then posted a 2-0 win over Omaha to advance to the National Championship and a rematch with Wisconsin-Parkside. The Vulcans overcame an unearned run in the first inning to claim a historic 2-1 victory over the Rangers with Kerry Novak delivering the game-winning single in the bottom of the sixth. The 1997 team featured six current members inducted into the Athletic Hall of Fame – Dana Boyer, Sarah Cassin, Tara Douglas, Kerry Novak, Danielle Penner and Lith Webb.