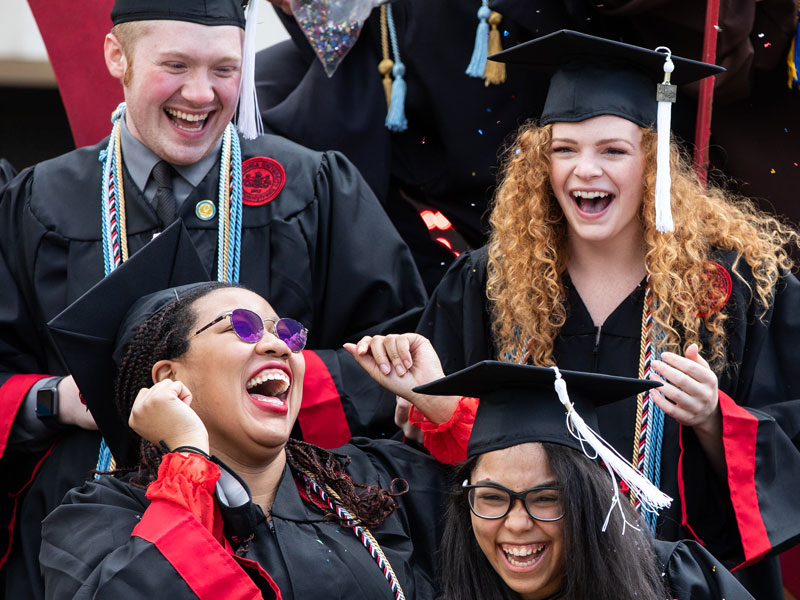 Pennsylvania Western University will celebrate the academic success of more than 1,600 graduates in the Class of 2022 during commencement ceremonies at the California, Clarion and Edinboro campuses.

“Earning a college degree is a significant achievement, and the Class of 2022 has shown exceptional resilience and perseverance in pursuit of that goal,” Pehrsson said. “The sky is the limit for these bright, talented students, and I look forward to celebrating their accomplishments together.”

Faculty mace bearers will represent their colleagues at each ceremony. The mace bearer distinction emphasizes the importance of faculty in PennWest’s academic environment and the central role that faculty play in the academic and personal development of students.

“At its core, our university is about the personal growth of our students – intellectually and personally – and the lives of both students and faculty are enriched in the teaching and learning process,” said Dr. Scott Miller, vice president of Academic Affairs and provost. “We are privileged to serve in this role of educating those who will shape our future.”

The fall 2022 commencement ceremony at the California campus is scheduled for 9 a.m. Saturday, Dec. 10, in the Convocation Center.

In addition to President Pehrsson and Provost Miller, speakers will include Jahneek Fant, who serves as California’s student trustee on the PennWest Council of Trustees, and Amy Smiley ’07, representing the California Alumni Association.

Dr. John R. Cencich, professor in PennWest’s Department of Criminal Justice, will serve as mace bearer. A criminologist and international lawyer in his 21st year at PennWest California, Cencich designed the first professional Doctor of Criminal Justice program in the country. He holds a doctorate in Juridical Science from the University of Notre Dame.

PennWest University Choir will sing The Star-Spangled Banner, “Celebration” and the alma mater.

Kathryn Robinson, Clarion’s student representative on the PennWest Council of Trustees, and David Reed ’09, representing the Clarion Alumni Association, will join Pehrsson and Miller in offering remarks during the ceremony.

Dr. C. Frank Shepard, associate professor in PennWest’s Department of Finance, will carry the ceremonial mace. After being admitted to practicing law in Pennsylvania and the U.S. federal court, Shepard arrived at Clarion in 1990 and soon became the director of Legal Studies. Dr. Shepard earned his Juris Doctor from the University of Akron in 1982.

Speakers will include Pehrsson and Miller as well as John Wheeler, who serves as Edinboro’s student representative on the PennWest Council of Trustees, and Mitch Kallay ’90, representing the Edinboro Alumni Association.

Dr. Susan Packard, retired professor in the Department of Counseling, School Psychology and Special Education, will serve as mace bearer. Packard served as a full-time faculty member at Edinboro from 2001 until her retirement in June 2022. She earned a Ph.D. in Counselor Education with a specialization in Rehabilitation Counseling from the State University of New York at Buffalo.