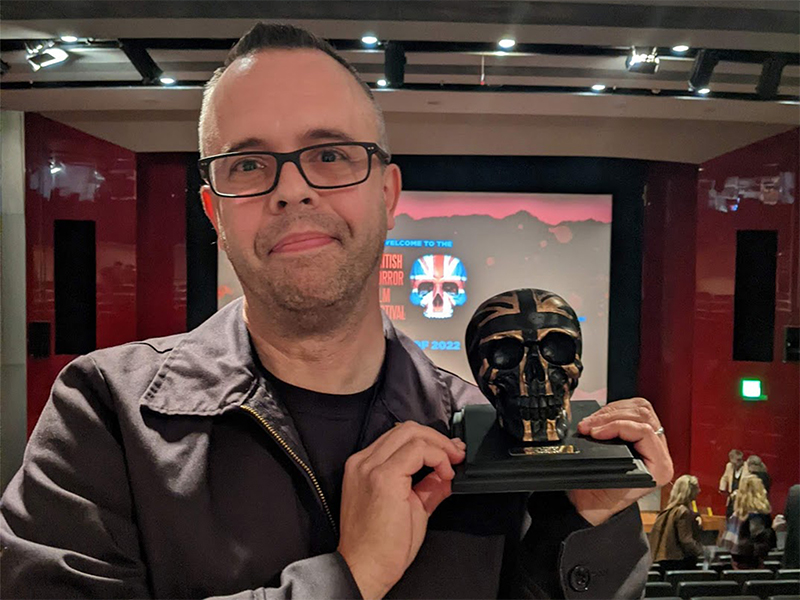 Copeland, an Edinboro resident who earned his degree in applied media arts, won the Best Screenplay award for “OREAD,” a story about friends who reconnect in the mountains only to cross into the realm of myth, madness and horror.

“Since I entered a foreign festival, I didn’t have high hopes of being selected,” said Copeland, who spent six months writing “OREAD” and one month editing and making revisions. “I thought it would be awesome to be selected at a festival in the country that invented the language I write in.”

Copeland describes “OREAD” as a folk/horror screenplay with mythological concepts transformed into a full-length horror story. Designed as a love letter to the filmmakers who inspired him, Copeland credits Sam Raimi (“Spider-Man,” 2002), John Carpenter (“Halloween” series) and Guillermo del Toro (“Pan’s Labyrinth") as his film mentors.

Copeland and his wife, Rana, traveled to the British Museum in London, where the awards ceremony was held after hours. After viewing the short-film entries and the feature film, the awards committee started to list the special commendations for the Best Screenplay award.

When his name wasn’t called, Copeland was anxious but still reflected on the honor to be nominated.

But then, after the commendations were named, the committee announced that Copeland was, indeed, the Best Screenplay winner.

“My wife and I just looked at each other and said, ‘What just happened?’” he said. “I’m still shocked.”

Rooted in the mythological story of mountain creatures who were corrupted by humans, Copeland said he created the characters with a piece of his own personality in each of them.

“Hopefully they are relatable for people,” he said. “Even with my creatures, they have a certain sadness about them – so they’re not just these demonic, awful little nymphs that do a bunch of horrible things.”

After graduating from Edinboro in 2008, Copeland worked on a variety of freelance digital and special effects projects and took a job as a commercial and promotions producer for a local television station. After getting the itch to create screenplays and films, Copeland quit his job to focus on his independent projects.

To help with the screenwriting process, Copeland enrolled in introductory and advanced screenwriting courses at Edinboro with English professor Dr. Robert Bernard Hass.

Hass, who came to Edinboro in 2001, credited Copeland’s perseverance in overcoming the screenplay’s initial deficiencies by refining the story’s arc – concentrating on making each scene a self-contained dramatic unit. He also complimented Copeland on his ability to incorporate history and tradition into a horror story.

“He was serious in his intention, and that seriousness inspired me to work diligently with him to help him realize his dream,” Hass said. “He imagined his future into being, and I am extremely proud of him.”

Copeland said he was thankful for Hass’ constructive criticism, which provided the necessary boost to finalize the screenplay.

“Dr. Hass pushed me because he thought the direction I was taking had potential,” Copeland said. “And he was right.”

Additionally, Copeland took a film course from Professor Brian Fuller, who helped him develop his craft and taught him how to enter film festivals.

Following his success at the British festival, Copeland’s work was also accepted as a finalist for the FilmQuest Film Festival in Provo, Utah, and the Be Afraid Horror Fest in Gorizia, Italy. Additionally, his screenplay was selected to be featured in the Oregon Screams Horror Film Festival in Portland.

Following his win and the awards circuit, Copeland’s goal is to receive enough attention of filmmakers and producers to bring “OREAD” to life – and to continue writing the story into a trilogy.

“It started out as a short story, then ballooned into a feature. And when I was writing the feature, I came up with the idea for a sequel,” he explained. “While I was plotting out the sequel, I came up with an idea for a prequel to show a hundred years previous.”

But horror filmmaking and screenwriting aren’t just recent passions for Copeland. He caught the bug when he was younger and his parents gave him permission to watch any film genre he chose.

That led to Friday-night film rentals, when Copeland became hooked on the story lines and special effects of horror films.

“My parents told me I could watch whatever I wanted as long as I slept in my own bed and didn’t get too scared,” he said.

Check out more of Copeland’s short films, animations and digital effects at his Vimeo portfolio.